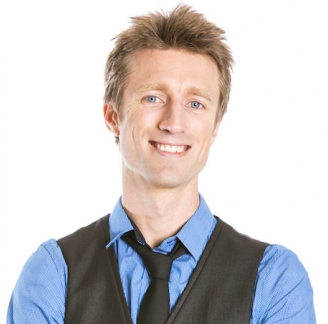 Sammy J is an award-winning comedian, writer and musician. A proud nerd, he abandoned his law degree to travel the world and sing funny songs for a living. You may have seen him on TV, at a festival, or as one half of the man/puppet duo Sammy J & Randy.

In 2017 he appeared on ABC TV with his political satire "Sammy J's Democratic Party", which saw him broadcasting from a bunker underneath Parliament House and featured his hit segment "Playground Politics". He was also nominated for the Barry Award at the Melbourne International Comedy Festival for his solo show "Hero Complex", which enjoyed a sell-out national tour and five-star reviews.

In 2019, Sammy brings his hit ABC TV characters to the stage in his new show 'Sammy J's Major Party.' Sammy's character The Government Coach made his ABC debut in 'Countdown to Glory', a fly on the wall documentary series about the 2019 Election. Currently, Sammy's satirical sketches can be seen every Thursday night on the ABC.

As an MC, Sammy J has hosted major conferences and events, interviewed politicians, and injected a sense of fun and enthusiasm at every step. He has also composed countless original songs to suit specific occasions.

With three ARIA-nominated albums under his belt and a Helpmann nomination for Best Comedy Performer, Sammy J is truly one of the most inventive and likeable performers in the country.

He is a proud ambassador for Big Brothers Big Sisters and Oxfam Australia.

In 2020, Sammy will be the host of ABC Radio Melbourne Breakfast, and tour his new show "Symphony in J Minor" around Australia.