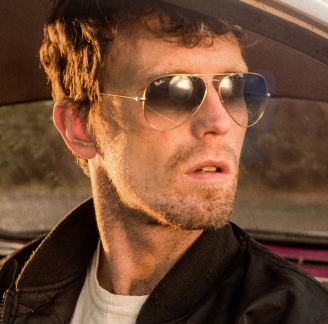 You might have seen David Quirk in Rosehaven, Celia Pacquola and Luke McGregor's acclaimed ABC series where he plays the odd/lovely character of Damian, the Tasmanian hoarding locksmith. Or maybe it was as Josh Thomas' love interest in Please Like Me. If not there, perhaps it was with Sam Simmons in Problems, with The Kates in Get Krackin, or with Sammy J & Randy in Ricketts Lane. Who can say?

Stand-up comedian and actor David Quirk has cemented his place on our TV screens and as an original voice on the international comedy circuit, with hit live shows in Australia and the UK.

His break-through live show, Shaking Hands With Danger, a storytelling tale about infidelity, took out the coveted peer voted award - The Piece of Wood Award at the Melbourne International Comedy Festival, and was nominated for Best Comedy at the Sydney Comedy Festival. The show also ran successful seasons in both London and Edinburgh.

His follow up, Career, Suicide in 2014, also garnered great reviews and has consolidated David's place as one of our most interesting, honest and daring standups.

In 2015, David premiered his eagerly awaited show Thrasher – a pop-up site specific show performed in the actual skateboard shop where he has worked for most of his adult life. He followed this up with Approaching Perfection in 2016, a unanimous four-star show that toured the country and the UK: 'His observations are revealing, his realisations endearing – Quirk is a comic not to be missed.' The Skinny(UK).In addition to his numerous successful solo shows, David has co-created and performed in award-winning collaborations: The Incident, a bromantic comedy with Sam Simmons, for which he won the Golden Gibbo Award at the Melbourne Comedy Festival in 2010. He went on to win the Innovation in Theatre Award at the Melbourne Fringe Festival in 2011 for Bunny, written by Benjamin Cittadini and performed with Craig Peade.

In 2017 David premiered his successful show Cowboy Mouth at the Melbourne Comedy Festival and the Edinburgh Fringe, captivating audiences and critics alike. In 2018, Cowboy Mouth was filmed live in Melbourne for ABC's Comedy Next Gen. David filmed a lead role in short film The Comedian directed by James Woods and collaborated with Benjamin Cittadini, starring in Elmo at the Melbourne Fringe Festival.

In 2019, David wrote a new show and filmed the final series of Rosehaven.

David's had a fantastic start to 2020, opening for American comedian Nick Kroll in Melbourne. He returns to the stage, touring his new show Astonishing Obscurity around Australia 'Brilliant...we've been on a journey through Quirk's own curious mind, and what a ride it's been.' ★★★★ The Age.

DAVID QUIRK AT THE COMICS LOUNGE